Thanks to the Kazakhstan city’s loss of capital status in the 90s, rare mosaics, sgraffiti and other artworks escaped destruction.

Then Jama Nurkalieva and a small group of colleagues conducted a site survey of a disused Soviet-era panoramic cinema in Almaty, the former capital of Kazakhstan, they had no idea what lay behind the internal plasterboard wall that faces out towards the street – until someone spotted a narrow gap.

As the caretaker shined a light into the darkness behind, the group caught a glimpse of a man’s head. Out came the toolbox and the rest of the artwork was slowly revealed: a Soviet-era sgraffito by the graphic artist Eugeny Sidorkin that had been lost and forgotten for decades.

From the Italian graffiare, to scratch, sgraffito is a technique that involves placing one layer of plaster or cement over another, and then scratching through the superficial layer to reveal contours or patterns beneath.

Built to a standardised design in 1964, the cinema was one of the largest in the USSR. It was fronted entirely by large panels of glass that offered an unobstructed view of the sgraffito to passersby.

Now the former cinema is being repurposed as the Tselinny Centre of Contemporary Culture. The discovery of a work by Sidorkin – honoured as People’s Artist of the Kazakh Soviet Socialist Republic before his death in 1982 – is particularly exciting, says centre director Nurkalieva. The sgraffito is being brought back to its former glory by restoration experts, along with the architect Asif Khan and Sidorkin’s son Vadim, an artist. 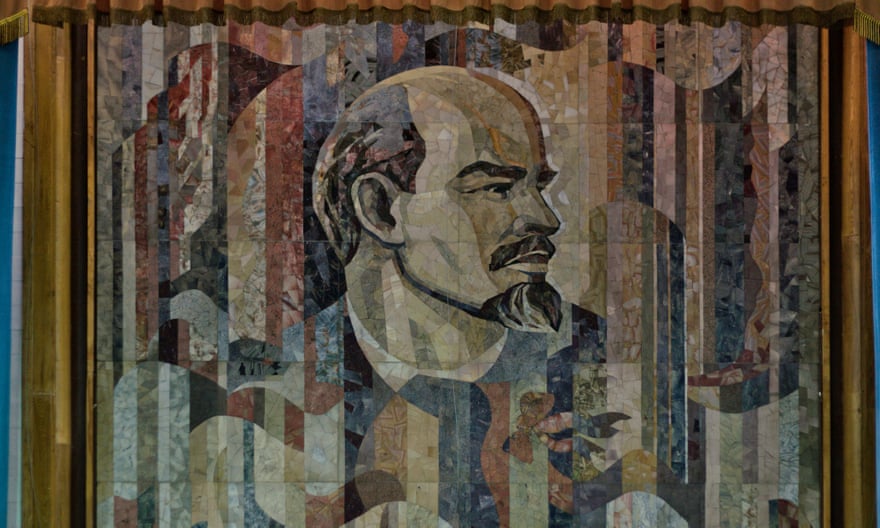 The sgraffito was not the only Soviet-era art uncovered in Almaty last year. Dennis Keen, founder of the Monumental Almaty website, uncovered a 1984 mosaic of Lenin at the Kazakhstan Academy of Science in September. The work, by Vladimir Tverdokhlebov and a team of artists, had been boarded up for more than 20 years.

“There is a major interest in Soviet imagery and especially Lenin,” says Keen, but the mosaic will be hidden from public gaze by a curtain on account of its political sensitivity. Students and visitors will only be able to view it by arrangement.

In some post-Soviet cities outside Russia, communist symbols have been outlawed. Ukraine passed laws in 2015 that prohibit communist symbols from being displayed in public places, with up to 10 years in prison for those who flout the rules, and sanctions the symbols’ removal. Soviet-era mosaics that depict folklore, science and sport are exempt, but two political works, Lenin and Science, in the city of Kharkiv, and Always With Lenin, in Lysychansk, were torn down the following year.

Yevgen Nikiforov, author of Decommunized: Ukrainian Soviet Mosaics, estimates that up to 4% of Ukraine’s mosaics have been removed or covered since the law was introduced.

In Almaty, Keen estimates that around a third of the city’s Soviet-era artworks have been lost. What survives are largely mosaics, reliefs and sgraffiti, which, unlike painted murals and posters, endure well against the elements.

While there is little incentive now to cover or remove Soviet-era artworks depicting folklore and natural landscapes, they were sometimes controversial in their day due to supposed hidden meanings.

Ekaterina Golovatyuk, curator of an exhibition on Soviet modernist architecture at the Tselinny, recounts an anecdote in which an architect and an artist worked together to create a mosaic for a cafe. It was a straightforward depiction of a lake with a tiger on one side and goats on the other. “The [local communist] party was asking them, ‘What’s the meaning of this?’ They were saying, ‘Nothing, it’s just a natural landscape’ – but they couldn’t convince them that there was no hidden political message.”

Golovatyuk believes Almaty has as many surviving mosaics as it does because Kazakhstan’s president, Nursultan Nazarbayev, changed the country’s capital from Almaty to Astana in 1997.

With much of the country’s subsequent investment and development directed at this new “city of the steppes”, Almaty escaped relatively unchanged.

“Nazarbayev wanted to have a clean ground to express his ideology and to experiment with architecture, so Almaty was left alone,” says Golovatyuk. “It has been its biggest fortune in a way, because otherwise I think there would have been much more damage, and many more things would have been lost.”

Published by “The Guardian”