The Astana Economic Forum addressed all the issues expected of an international summit: inclusivity, sustainability, security, change. But outside the conference hall, cracks seemed to be appearing.

The Astana Economic Forum is a statement of how Kazakhstan would like to see itself: glitzy, modern, purple, and in the image of its first president and multi-decade strongman leader, Nursultan Nazarbayev.

This year, the event opened with a ceremony to match the Olympics, with dancers spinning in sync to a digital wave backdrop. Once the music stopped, and the stage switched back to purple, the star of the show appeared.

Before assuming his seat – naturally, in the middle of the stage – the 78-year old Nazarbayev greeted each of his A-list international speakers. Then he addressed the hall. He had some explaining to do, this being the first time he had addressed the forum since announcing his partial retirement in March.

“I took a historic decision in the interests of the country,”  he said. Stepping down was “difficult”, said the man who, since 1988, has been the totem pole around which all of Kazakhstan has danced. Now it was all about others, and assisting the “peaceful transfer” of power.

“I think Mr Tokayev is best placed to take over,” he said.

Extraordinary elections on 9 June will almost certainly return Kassym-Jomart Tokayev, Mr Nazarbayev’s hand-picked successor with a comfortable majority. It is unlikely the former diplomat will get close to the nail-biting 98 per cent last recorded by Nazarbayev. But neither does the curated field of unrecognisable grey suits stand a chance against Nazarbayev’s chosen successor. The one opposition figure on the ballot — former journalist and government press officer Armizhan Kosanov — is likely to be a distant second.

Most in Kazakhstan assume Tokayev will continue to play second fiddle for as long as Nazarbayev is alive and, possibly, even give way to his eldest daughter at some near juncture. Certainly, the interim president has shown anything but independence. Upon appointment in March,  Tokayev signed a bill renaming all the central streets of major Kazakh towns after his mentor. Then he announced the capital, Astana, would be renamed likewise — Nur-Sultan.

It would be a stretch to say that the capital was in any way lacking in tributes to Kazakhstan’s first president.

The city – a bizarre Las Vegas built out in the windswept northern Kazakh steppe  –  is more accurately a living Nazarbayev museum.

Upon arriving at Nazarbayev airport, you pass the Nazarbayev University, then the Nazarbayev hospital and the Nazarbayev medical centre. Monuments to Nursultan Nazarbayev appear and disappear as you go. On the skyline are the numerous extravagant buildings constructed in homage to the leader. Tony Blair was a convert too — but far from the only westerner to prove susceptible to Mr Nazarbayev’s charm and/or wallet. A transparent tent with an all-year-round beach is one of the several buildings Norman Foster bequeathed to the city.

The capital’s defining glory is undoubtedly the Baiterek tower. A symbol of the 1997 transfer of the capital from Almaty in the south, the tower is meant to depict a “happy egg” nestled atop the branches of a poplar tree. Inside the “egg” are a special viewing platform and a gilded replica of Mr Nazarbayev’s own hand. When you put your palm on it, the national anthem plays. It’s a lovely touch. 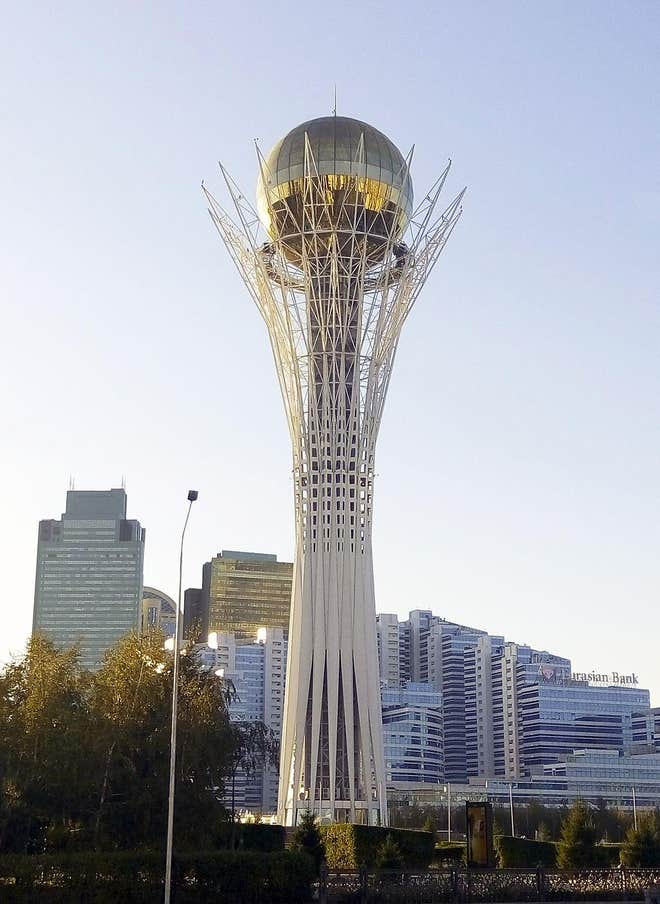 Back inside the conference hall, the foreign dignitaries speaking at the Astana Forum seemed fully signed up to the Nursultan vision.

The IMF’s Christine Lagarde praised the “leader of the nation”, and the country’s promising 3.5 per cent growth rate, with only a cursory nod to “problems of corruption”. Cue applause. Risto Siilasmaa, head of Nokia, talked of the “energy” of transformation in the country. More applause. The Armenian president Armen Sarkissian, who revealed he had visited Kazakhstan while Nursultan while it was still a sleepy town, revelled in the “monumental” changes in the capital.

“Everything starts with a vision,” he said. “Nazarbayev had that vision.”

There was nothing at the forum that suggested that Nazarbayev’s latest vision – the carefully managed succession – would be any less successful. Stability, sustainability, and security were the oft-repeated watchwords.

But outside the conference hall, cracks were appearing in the Kazakh monolith.

In the last month, the country has seen an unprecedented and unexpected uptick in civil disobedience. Part of it seems to have been organised from exiled and banned opposition parties abroad, but part is undoubtedly local too.

On 1 May and 9 May, there were significant protests in many of Kazakhstan’s major cities. There was an uncompromising clampdown in response. Dozens were arrested, and on at least one occasion authorities went to the extraordinary measure of blocking huge parts of the Internet to limit the dissemination of news.

The wave of protests on the eve of elections is arguably the regime’s biggest test since 2011, when a strike in the oil-producing region of Zhanaozen ended in violent suppression and the deaths of at least 14.

The leadership’s obvious nervousness was encapsulated on 13 May, with the tragicomic arrest of student Aslan Sagutdinov. In his own words, Mr Sagutdinov had decided to test the authorities’ sense of humour by holding up a blank sign in a central square in Oral, northwestern Kazakhstan. Lacking obvious sensibilities for the postmodern, the police duly arrested him. Mr Sagutdinov has reportedly been punished for his cheekiness with a draft to the army.

The spark for the new protests was the 21 April arrests of eco-activists Asya Tulesova and Beybaris Tolymbekov. The two were detained and imprisoned for 15 days after unfurling a protest banner at the Almaty marathon. The message of the banner was simple: “You can’t run from the truth. #forafairelection #Ihaveachoice.”

Ms Tulesova, in particular, stood out for her defiant words in court: “It’s a crime. But it’s not my crime against the state. It’s the state’s crime against me as a citizen of Kazakhstan.”

Freed from detention a week ago, Ms Tulesova told The Independent that she did not anticipate authorities would react to the protests so fiercely. But, she says, they likely felt compelled to move because her message had “touched on an underlying mood” in the country. People are “pushing back against the prospect of an undemocratic transition” and managed election, she said.

“Our nation is used to being passive, inert, and exactly doing what we said – running from the truth,” she said. “Our message was all about telling them It was time to wake up, to quit escaping reality.”

Another of the most recognisable faces to emerge in recent weeks is Astana-based civic activist Alizham Izbassarov.

Mr Izbassarov told The Independent that up until 2011, he was a signed up supporter of the Kazakh regime. But “something clicked”, he says, after the tragic events of Zhanaozen, since when he has been “committed to pushing for democracy”. He claims to have witnessed a similar switch in his compatriots’ attitudes within the last month.

“Clearly there is nothing good in the way our politicians are reacting so horrendously,” he said. “But I see people are losing fear. I’m certain the Kazakh Spring has begun, though it is important to point out we’re intent on doing it peacefully.”

Such words are likely to worry all those associated with Mr Nazarbayev and the political system he has dominated for the past three decades. Two years ago, the then-president warned against a Ukrainian-style dalliance with “liberalism”, suggesting it would lead to the same tragic outcome that followed the Maidan revolution.

That, say activists Ms Tulesova and Mr Izbassarov, should be evidence enough that the regime has no intention for anything democratic to result from next month’s elections. Both criticise the only declared opposition candidate, Amirzhan Kosanov, for lending an air of legitimacy to them. Both support a boycott, and at least part of the opposition is set to join them.

Mr Kosanov, on his part, told The Independent that his record of opposition – including hunger strikes and three short periods in jail – was evidence of his “honourable intentions”. He had “no problems” criticising the recent arrests, which, he says, were “a grotesque caricature of authoritarianism”. But he was also “sure” the elections offered a chance to change the country.

“I understand why the regime registered me, that they needed me,” he said. “But now I’m registered, it would be wrong not to take part.”

“Not taking part is simply a death sentence for the opposition.”

Published by “The Independent”