We’re entering an unpredictable era where lack of certainty is the only constant – this is a key takeaway from two packed and inspiring days at the Astana Economic Forum. But alongside this lack of stability comes an opportunity to think anew: as we experience fundamental changes to things we previously took for granted we can find new competitive advantages, particularly by investing in people to build an inclusive, human-centred future.

The 12th Astana Economic Forum took place on 16-17 May in Nur-Sultan, Kazakhstan’s capital. The Forum has become not just the main global discussion platform in Central Asia, but also an influential international platform on the world scene for debating financial systems and the world economy. Among international luminaries flocking to the summit were Christine Lagarde, Chair of the International Monetary Fund, and Paul Romer, recipient of the Nobel Prize for Economics, as nearly 6,000 people from 75 countries gathered to hear from top politicians, scientists, and businesspeople.

We are experiencing a fourth industrial revolution: we’re no longer primarily concerned with natural resources but with technological advancements, economical growth, urban development, and the human experience. Under the banner of “Inspiring growth: people, cities, economies”, the Forum explored how we can face this change head on: “By 2030, about 375 million people around the world will need to undergo training and change their profession,” said Kazakhstan’s first president Nursultan Nazarbayev. By 2030, 60% of the global population will be living in cities, and economic development will need to shift its focus: “Investments now no longer address countries, but cities” he added.

The city of Nur-Sultan is a good example of how urbanisation plays out: this fast-growing city has seen its population double to over a million people since 2002. Ensuring this growth is sustainable is a key priority for Kazakhstan, whose young capital can benefit from looking at how others have faced this challenge: “When it’s time to implement smart cities’ policies, […] look at cities that have done it, that are learning how to do it,” said Xavier Sala-i-Martin, Professor of Economics at Columbia University. “Look at Singapore, at Dubai and Barcelona. But then you have to come up with your own version.” 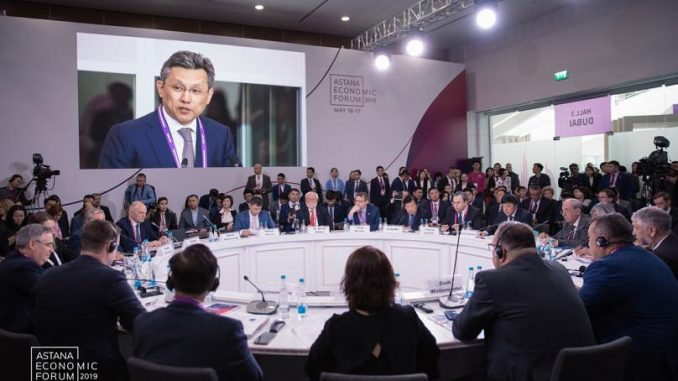 This fourth industrial revolution represents a new focus on how we can foster human talent. Han Zheng, Vice-premier of State Council of People’s Republic of China, said: “The innovations are about the expansion of human capital. To achieve success in this matter we must strengthen educational platforms and train qualified professionals.” Armenian president Armen Sarkissian called for a new system for civil participation which recognises that the way we’re making decisions is changing: “People’s voices are being heard more than ever before,” said Sarkissian, referring to how French President Emmanuel Macron in France rose to the top from a position of relative obscurity at a pace that was unprecedented in politics. “This coincided with the fact Macron had engaged in dialogue with people. This is a new world.”

This year’s Forum hosted a groundbreaking roundtable that brought together the International Monetary Fund, Ministers of Finance, and governors of countries’ central banks. The first Kazakhstani forum on UN sustainable development goals also took place during the Forum, as the optimism around the new urbanism is contrasted with a concern about sustainability – today only 10% of urban residents have living conditions deemed sufficient by the World Health Organisation. This is a delicate juncture for the global economy: “We have witnessed a slowdown since the second half of 2018, reflecting rising trade tensions and a tightening of financial conditions,” said Christine Lagarde, Chair of the International Monetary Fund. “We are expecting a rebound in late 2019, but it seems precarious and vulnerable to downside risks.”

Astana Economic Forum has become a place where parties reach agreements, as was the case also this year: the Astana International Financial Centre (AIFC) will be working with Blackstone-backed Bitfury, a leading blockchain developer which will be opening data processing centers in Kazakhstan in an effort to diversify its work environment. “We are encouraged by their enthusiasm for more transparent systems as well as their commitment to participate in a growing global economy powered by blockchain technology,” said Bitfury CEO Valery Vavilov. Bitfury is also working on education and training programmes alongside the AIFC, enabling startups and IT companies in Central Asia to tap into the expertise of a industry major player.

The world has been transformed by amazing technological advancements, but there’s still one area which has yet to be fully affected by any of that: productivity. Nokia Chairman Risto Siilasmaa said: “Even with all the technology we’ve invented we’ve not been able to increase our productivity at the rate equal to the previous industrial revolutions. Because future is always more important than the past, we must ask the question: what can we do to avoid continuing the same trend? How can we harness the obvious productivity opportunities to the benefit of everyone?” Siilasmaa pointed to artificial intelligence, the Internet of Things, nanotechnology and quantum computing as vital tools to achieve this goal, pointing to research by Nokia and Bell Networks that predicts we’re heading into a leap in productivity, aided by 5G and low-cost, high-performance computing power.

But also Siilasmaa concluded that key to success is an investment in people. The Chair concluded his remarks by sharing how Nokia has trained every one of their 100,000 employees in machine learning, from the janitors to the CEO, in recognition that the knowledge of its people is the company’s strongest asset: “There is a level of urgency,” concluded Siilasmaa. “Change will never again be as slow as it is today. Therefore acting today gives you exponentially more time to achieve results thank if you wait until tomorrow.”